Translations of this page:

With the construction of a directional coupler one tries to reach as high a directivity as possible. For this you get an optimal resolution at the SWR measurement.

In the internet you can find some projects of such couplers with the well known AD8307. There one outbids oneself with directivities of more than 30dB up to 40dB, yes 50dB or even 60dB I have already seen.

In this article I would like to deepen the understanding of measurement errors and why one must always document the measurement setup clearly and in detail when evaluating measurement results, because otherwise they are simply numbers on paper. In addition, for such high directional acuities, you need measuring instruments in the price range of mid-range cars. To show this, a few simple formulas are sufficient.

we build a directional coupler for the KW range incl. 50 MHz. The typical circuit looks like this: 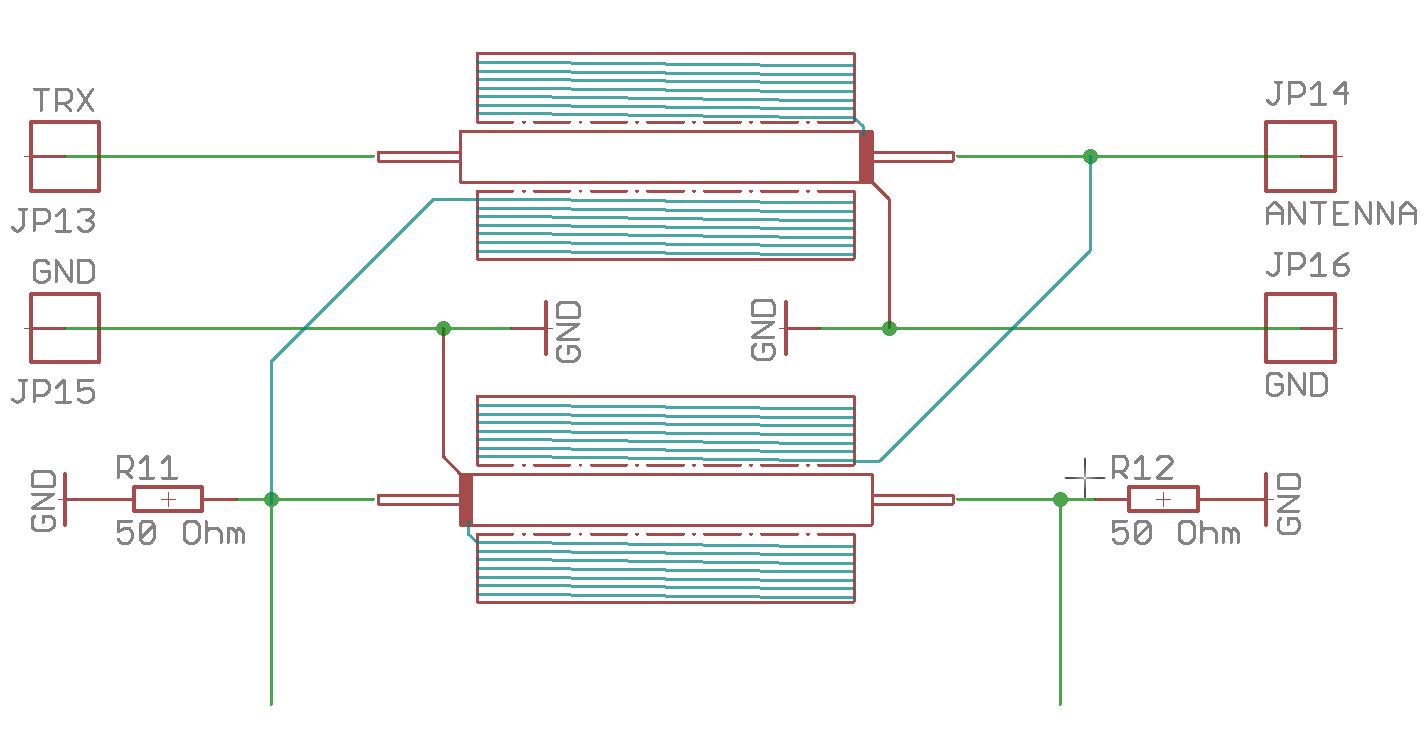 Power is colloquially always given in watts. For calculations and circuit design, however, it is easier to express the power in dBm.

The conversion from Watt to dBm (and vice versa) is simple, dBm means that we refer to 1 milliwatt. A power of 1 milliwatt is therefore called 0 dBm. Then we go up in steps of 10:

“Directivity” means that the coupler can distinguish the outgoing and return power as best as possible. The better this works, the more accurately the SWR can be measured.

We feed a power of 100 Watts (50dBm) into the directional coupler, we terminate the antenna connection with a (theoretical) perfect-ideal 50 Ohm dummy load. So there should be no returning power, we may only measure a leading of 100 watts (50dBm).

so the directivity of this coupler would be 50 - 16 = 34dB. These 34dB show that the directional coupler shows a little returning power when there should be none. It is simply the measurement error of the coupler. The higher the directivity is the better the coupler is.

The directivity shows the resolution of the coupler. You can convert this with a formula into the smallest SWR that can be measured with this coupler. Instead of a confusing formula, here is a ready calculated table: 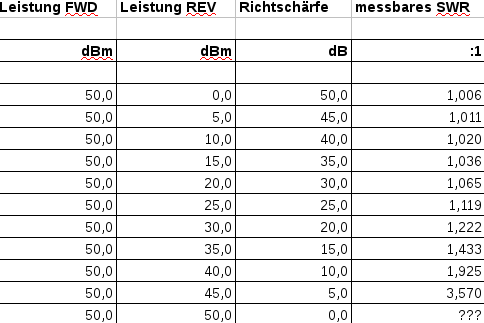 precision requirements, first an example of a bad coupler:

Suppose someone builds a directional coupler that has “only” 20dB directivity. This means, if I apply 50dBm (100 watts) power, the directional coupler will erroneously show a returning power of 30dBm (1 watt). From the table above, you can see that with a directivity of 20dB, an SWR of 1.22:1 is displayed even if there is no returning power at all.

There are many reasons for this, one of them is the tolerance of the 50 Ohm resistors in the coupler. For the coupler to show this measurement error, one of the 50 ohm resistors would have to have an actual value of about 41 or 61 ohms. Of course, it could also be that these resistors are correct, but instead our dummy load has only 41 (or 61) ohms. That would cause the same error, or it is a combination of both errors.

There is nothing unusual about this. For example, my 1kW dummy load (manufacturer: Vectronics USA) has 64 ohms when cold and 55 when hot.

Commercially available SWR meters are probably in this range in accuracy, expensive units maybe up to 30dB true acuity.

and here an example of one of the many construction projects, a 40dB coupler:

we now perform the same calculation for a directional coupler whose precision should correspond to a directivity of 40dB.

If we again take the 50 Ohm resistors as the source of error, this means that instead of 50 Ohm, the resistor actually has a value of 49 or 51 Ohm. This would be a tolerance of +/- 2%. The Florida-RF RF resistors commonly used in precision dummy loads have tolerances of 1 to 10%, depending on price, so they are in that range.

However, we have 3 such resistors, two in the coupler and one in the dummy load. To exclude measurement errors caused by the resistors, all three must have less than 1% tolerance, and that over the whole frequency range. On the 80m band this is still easy, but at 50 MHz this accuracy becomes a real challenge.

In addition, especially on 50MHz, we have errors due to unwanted couplings, parasitic capacitances and inductances, and what must not be forgotten, due to the linearity of the AD8307. Often directional couplers are compensated by installing small capacitors (some 10 pF). However, I have made the experience that with these Cs one only conceals existing errors and thereby easily gets resonances. It is better to build the directional coupler in a way that it works without compensation.

The realistic feasibility of a directional coupler is probably a maximum of 35dB, which is quite an achievement, because to be able to measure an SWR of 1.04 : 1 is quite impressive.

and for fun one more the touted 50dB coupler:

he would show at the prefect dummy load at 100W a returning power of 1mW (=0dBm). The allowed tolerances of the 50 ohm resistors here would be 49.7 to 50.3 ohms, or +/- 0.6%. That for all three resistors. So we would need RF suitable resistors with 0.1% accuracy and of course the layout and wiring must be perfectly matched. That this cannot work is clear.

Measurement of the directivity:

the above used tolerance of 50 Ohm resistors is only one of many sources of error, I used it because it is easy to understand.

However, it is much more difficult to actually measure the directivity, because here real precision is required in the measuring equipment and especially cables and wiring.

I have built a 40dB coupler which showed “clearly” different results depending on which coaxial cable I used for the dummy load and whether a PL-N adapter was looped in. If you measure in the range of better than 1.1 : 1 then you quickly realize that coax cables have very different quality, and that adapter plugs are a disaster.

In order to be able to measure reasonably, I finally soldered a 50 Ohm RF resistor to the output of the directional coupler without any cable or connector.

From this alone you can see that directivity of 40dB and more belong to the realm of voodoo. Anything better than 25dB is very well suited for the purpose of antenna matching.

Construction projects that show directivity levels above 30dB should always document the measurement setup as well as the tolerances of the measurement equipment used. I hope that I can stick to this requirement myself

to determine the values of the directional coupler it is necessary to know the applied RF power as exactly as possible.

First I simply held an oscilloscope with a 10:1 probe to it, measured the RF voltage and calculated the power with P = U² / 50. Actually this is a very accurate method, BUT unfortunately the capacitance of a probe distorts the measurement of directivity quite considerably, especially at higher frequencies.

After many attempts I came to the following solution:

at the input of the directional coupler a decoupling element adapted to 50 Ohm is attached, everything as short as possible, with SMD resistors since these are much better for HF than wired types.

(please forgive the scribbling, freehand drawing with the mouse is not one of my strengths) 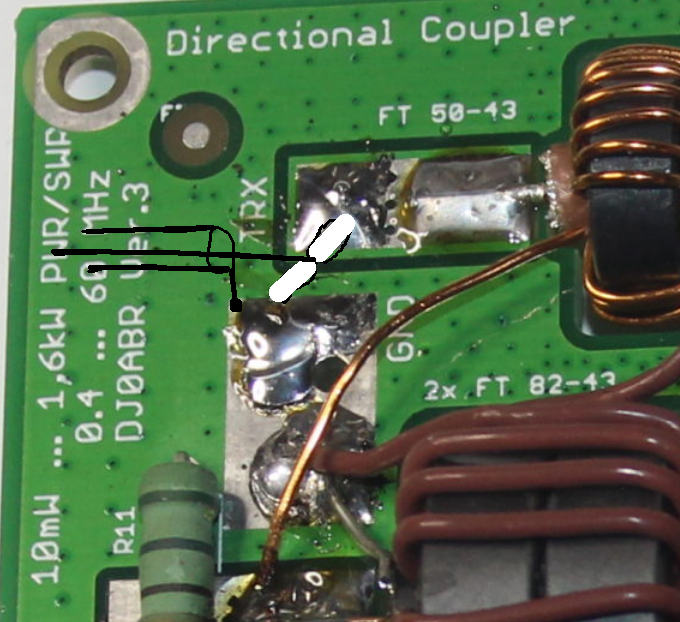 the upper resistor (at TRX) has 3.3 kOhm, the lower one against Ground has 50 Ohm. If you don't have a 50 Ohm resistor, you can connect 56 Ohm and 470 Ohm in parallel. At the connection of the two resistors, a thin coaxial cable is used and the shield of the cable is placed on the ground plane.

This decoupling does not influence the measurements at the directional coupler. The decoupling attenuation is: 42.5 dB (depending on the tolerance it can be between 42.2 and 42.8 dB, check if necessary). The connected measuring device (osci, analyzer etc.) must have a 50 Ohm input !

How does this decoupling work ? 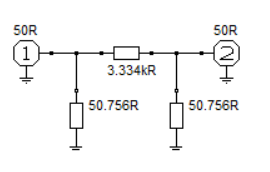 the left 50 Ohm resistor is the dummy load which is connected to the output of the directional coupler. The other two resistors are soldered on as in the picture above. This attenuator has a calculated attenuation of 42.5 dB. But as you can already see the resistor values are not 100% accurate, so there will be a deviation of a few tenths of a dB. This can bring several watts of error in a power measurement, actually not bad, but who wants it even more accurate must therefore measure the exact attenuation of the decoupling element in advance.

And something else that caused me hours of headaches: the measured power after the output coupler was always a tad too small than it should have been. But of course the coaxial cable and the connectors to the measuring device also have a small attenuation, these are only tiny tenths of a dB, but in total this is already noticeable.

In the paxis, all this is completely unimportant. But I know that many radio amateurs (like me) want to approach things pontifically accurate and then you have to consider even such small influences.

Except where otherwise noted, content on this wiki is licensed under the following license: GNU Free Documentation License 1.3